A pastor in eastern Uganda was hacked to death on Wednesday (Dec. 23) as he and other church members resisted an effort by Muslims to take over their land, area church leaders said.

In Nansololo village near Mazuba, in Namudumba District, Muslims erected a boundary fence with poles and barbed wire that included land of the Pentecostal Church Ministry (PCM), a church elder told Morning Star News. A church member who lives close to the church building telephoned pastor Bongo Martin, who immediately came to the site.

"Why are you encroaching on the church's land and removing the boundary marks?" Pastor Martin asked. A church member said the imam answered, "We have told you many times that we do not want the church to be located near our mosque. Your church has been taking our members to your church."

A Muslim named Abdulhakha Mugen then drew his sword and struck the pastor's neck, church members said. Pastor Martin fell down bleeding, and after more sword blows and decapitation, he died. He was 32.

"When I saw such a brutal killing of my pastor, fear gripped me and, fearing for my life, I went to report the incident to Nabitende area police," a church elder said.

Muslims threw Pastor Martin's body into a nearby river at 10 a.m., sources said. He is survived by a widow and two children.

"When I arrived at the scene, the pastor's body had just been thrown into the river, and many people came to witness the sad incident," the church leader said. "Tension remains high in the area."

The PCM church has documents showing it bought the disputed land from Kamya Ephraim for 3.4 million Uganda shillings (US$1,000), the church leader said.

"The church building extends to a nearby river that borders mosque land, and on several occasions we have been threatened that our church building should be removed from its present location," the church leader said.

The church intended to establish an orphanage in the center of Nansololo, but plans are now on hold. 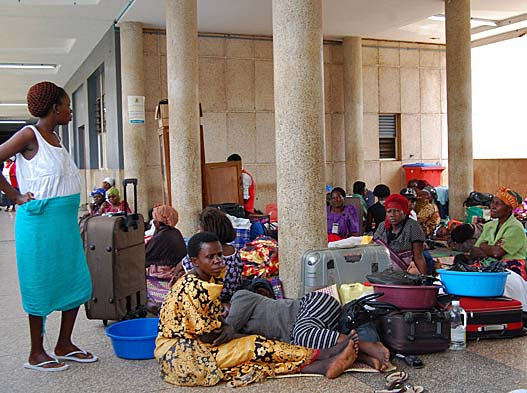 In another area of eastern Uganda, five underground Christians in a predominantly Muslim village, including a pregnant mother, have died from a pesticide put into their food after a Bible study, area sources said.

The Bible study took place on Dec. 18 in Kachomo village, Kachomo Sub-County, Budaka District at the home of Hajii Suleiman Sajjabi, a convert from Islam who had begun the study with eight family members who had come to faith in Christ under his influence.

Budaka central police and Kaderuna police are searching for one of Sajjabi's sons, 32-year-old Isa Sajjabi, who had opposed leaving Islam for Christianity and had distanced himself from his converted relatives. He was at the home at the time of the Bible study but did not participate in it.

Survivors said that when his mother left the study to get water for one of the group members during the study, she found Isa Sajjabi in the kitchen. After the study ended at 7:30 p.m. and the group began to eat, Isa Sajjabi and a Muslim friend disappeared. Group members began to feel ill after half an hour.

A doctor at Mbale Regional Hospital said a postmortem test showed a substance known as Malathion, a low-toxicity pesticide, in those who had died. Though low-level toxic, Malathion when ingested quickly metabolizes into highly toxic Tomalaoxon.

"Please be informed that we have known of your deception, and we cannot take this lightly," the imam wrote. "You should stop trying to change the Muslims to Christianity in the name of providing support to our members of the Muslim ummah [community]."

Sajjabi stopped going to the mosque after receiving the letter, and he and his family became fearful. Sajjabi had begun the study after distributing clothes and food in Kaderuna in October, and then inviting some close friends to his home for a luncheon. At that time he gave out eight Bibles, a local Christian leader said, and the Bible study meetings began in his house.

The local Christian leader, whose name is withheld for security reasons, said Sajjabi was previously a secret disciple who had helped the Muslim community through several outreaches to the poor.

"For about two years, Hajji had managed to win eight members of his household, except one son who became resistant to the gospel," the ministry leader said. "Hajji Sajjabi was using the service outreach approach to reach members of the mosque, which he used to attend with the intention of winning some to the Christian faith, but he tried to remain secret in the Christian faith."

The Christian leader said he fears also for his life.

The incidents were the latest in a series of attacks on Christians in eastern Uganda. Islamic extremists in eastern Uganda on Dec. 8 set a deadly trap for a Christian policeman who had left Islam, and the next day other hard-line Muslims kidnapped three children from another convert in a nearby village. More than 20 Muslim extremists in the Komodo area of Kadama Sub-County, Kibuku District, killed officer Ismail Kuloba at about 4 p.m. after he responded to an urgent call to intervene in a supposed land dispute between warring parties, an area Christian told Morning Star News. Kuloba was 43.

One of the assailants, Mudangha Kasimu, threw a stone that hit Kuloba in the forehead. Kasimu then shot him twice in the head, and he died as other Muslims were shouting, 'Allah Akbar [God is greater],'" sources said.

An area source said a 14-year-old boy from Kabuna, Karami Hassan, was with Badir's three children when they were abducted near their home. The boy said a group of Muslims from Palissa were looking for Badir, and the boy led them to Badir's children.

Outside of Kabeshai, near Palissa, a Christian father of five who supported 10 children whose families had disowned them for leaving Islam was killed on Dec. 2. One of three men who attacked Patrick Ojangole reproached him for failing to heed a warning to cease his Christian activities before the Christian was killed, said a witness who was with Ojangole and escaped. Ojangole was 43.

On Nov. 12, the father of a young Muslim woman in east Uganda tried to beat her to death after she became a Christian, but community leaders intervened and limited him to disowning her, sources said. Kibida Muyemba learned that his 21-year-old daughter, Namusisi Birye, had put her faith in Christ at an evangelistic campaign held that day in Nandere village, Kadama Sub-County, Kibuku District, 41 kilometers (25 miles) west of Mbale, church leaders told Morning Star News. Birye and a man in the traditional dress of an imam confessed openly to receiving Christ, they said, and angry Muslims cut the event short.

On Oct. 19, Muslims in Kalampete village, Kibuku District who were angry at a Christian for leaving Islam killed his wife, a month after his brother was killed for the same reason.
Mamwikomba Mwanika, mother of three adult children and five others ranging in age from 17 to 9, died en route to a hospital after Muslims unknown to her dragged her from her home at about 9 p.m. and assaulted her, survivors said.

Her husband's brother, Samson Nfunyeku, was killed in the village on Sept. 23 after flaring tempers cut short a religious debate he'd had with Islamic scholars.

In Nsinze village, Namutumba District, a Muslim beat and left for dead his wife and 18-year-old son on Aug. 11 after learning they had converted to Christianity, area sources said. Issa Kasoono beat and strangled his wife, Jafalan Kadondi, but she survived, said a source who requested anonymity. He said other relatives joined Kasoono in beating her and their two sons, Ibrahim Kasoono, 18, and Ismael Feruza, 16, though the younger son managed to escape with only bruises on his arm.

The wife of a former sheikh was poisoned to death on June 17 after she and her husband put their faith in Christ in Nabuli village, Kibuku District. Namumbeiza Swabura was the mother of 11 children, including a 5-month-old baby.

In Kiryolo, Kaderuna Sub-County, Budaka District on March 28, five Muslims gang-raped the 17-year-old daughter of a pastor because the church leader ignored their warnings that he stop worship services, she said.

About 85 percent of the people in Uganda are Christian and 11 percent Muslim, with some eastern areas having large Muslim populations. The country's constitution and other laws provide for religious freedom, including the right to propagate one's faith and convert from one faith to another.