'Fantastic Beasts and Where to Find Them 2': 'The Crown' Actor Jared Harris Responds to Fans Who Prefer Him as the Young Dumbledore

Successfully pushing forward a new spinoff series from the ‘Harry Potter’ franchise, ‘Fantastic Beasts and Where to Find Them’ brings on a story set before Harry was born, went to Hogwarts and endured seven years of his purposeful schooling journey.

With a planned five-film series, fans are looking forward to certain well-loved characters making appearance, including a young Albus Dumbledore.

It was previously revealed that the beloved headmaster will be featured in the ‘Fantastic Beasts’ sequel as the story begins to draw attention towards the villain Gellert Grindelwald and his connection with the Order of the Phoenix leader.

Johnny Depp was already confirmed to appear in ‘Fantastic Beasts 2’ as the Dark wizard Grindelwald. On the other hand, there remains speculations as to who will take on the role of Dumbledore, especially with the character having a highly interesting backstory.

Casting suggestions have ranged from Arthur Darvill to Ewan McGregor, but what has been attention-grabbing is the possibility of Jared Harris playing the role. ‘The Crown’ actor’s father, the late Richard Harris, played Dumbledore in the first two ‘Harry Potter’ movies before Michael Gambon took over the character.

Richard Harris played Albus Dumbledore in the first two 'Harry Potter' movies- 'The Sorcerer's Stone' and 'The Chamber of Secrets.'

Harris already responded to the online campaign going on for Warner Bros. and even author J.K. Rowling to cast the actor into the Wizarding World.

"They're obviously thinking about it," the ‘Mad Men’ alum said in an interview with the Standard Online. "I haven't heard anything and I don't expect to. It's not up to me. Having seen [fan campaigns] before I find that [film bosses] don't like to have their hands forced. These campaigns almost always go in a different direction."

Harris, who played King George VI in Netflix’s The Crown, was being interviewed prior to the launch of his latest film, Allied.

The 55-year-old star has already proven his skills as an actor after plunging into a wide range of movies in various genres, such as ‘The Quiet Ones’ for horror, ‘The Mortal Instruments: City of Bones’ for young fantasy drama and the recently-concluded ‘The Crown’ for period drama, to name a few.

Fans have already taken to social media to express their thoughts and preferences when it comes to the young Dumbledore casting decision.

Meanwhile, producer David Heyman revealed that there will be a new location for ‘Fantastic Beasts 2, pointing towards France. 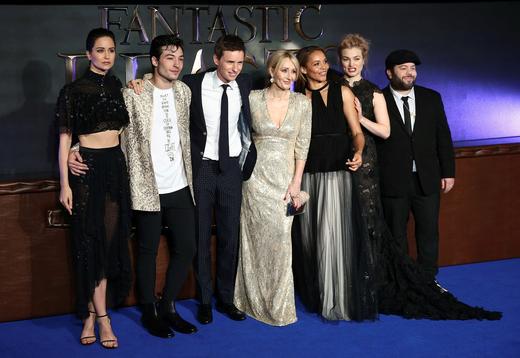 Writer J.K. Rowling (C) poses with members of the cast as they arrive for the European premiere of the film "Fantastic Beasts and Where to Find Them." Photo: REUTERS/NEIL HALL

Moreover, Newt Scamander will not necessarily be the only lead character in the upcoming installments.

“I don’t think [Newt will be at] the heart of all of them,” Heyman revealed. “I think he’ll be part — so will Tina, Queenie and Jacob — will be part of the next one ... [Dumbledore] and Credence and Grindelwald. I think they will be the main players.”