President Barack Obama and First Lady Michelle Obama believe their daughters Malia and Sasha Obama have the necessary preparations to go out into the real world by the time their family leaves the White House next month. However, careful as they will ever be, the couple is quite uncertain whether they are ready to let their girls go.

"They’re ready to get out, just out from their parents’ house,” Barack said in a joint interview with Michelle for PEOPLE Magazine “The fact that their parents’ house is the White House may add to it. But Malia’s going off to college. She’s a grown woman.”

Malia successfully completed high school in Washington, D.C.’s private Sidwell Friends School in June. Deciding to take a gap year, the 18-year-old has chosen Harvard and will begin her freshman year in the fall.

She turned to her father to come up with the final decision in choosing a university, eventually settling on Harvard.

“One piece of advice that I’ve given her is not to stress too much about having to get into one particular college,” Barack offered as advice during a town hall on College Access and Affordability in September. “There are a lot of good colleges and universities out there Just because it’s not some name-brand, famous, fancy school doesn’t mean that you’re not going to get a great education there.”

In 2012, Michelle shared that her Malia has an “interest in filmmaking.”

“Just like her father, she is an avid reader, and she enjoys movies and the whole process,” the FLOTUS said.

The Obama family will reside in an 8,200 square-foot rental home in Washington, D.C.’s Kalorama neighbourhood. Barack and Michelle admit the girls will have a hard time parting from their 1600 Pennsylvania Avenue residence, which has been their home for the past eight years.

“There’s a sentimentality about this place, that they’ve had so many amazing experiences, and the staff are part of the family,” the President said. “It is different for them than for most kids in that when they leave, they won’t be able to come back home. Malia’s spoken about how she regrets the fact that she won’t have that home base in the same way.” 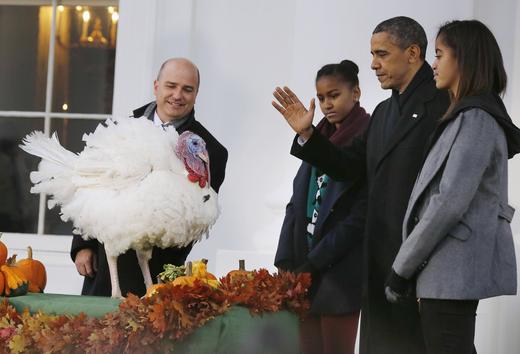 U.S. President Barack Obama joins his daughters Sasha (3rd R) and Malia (R) as they pardon National Thanksgiving Turkey "Popcorn", on the 66th anniversary of the ceremony, on the North Portico of the White House in Washington, November 27, 2013. Photo: REUTERS

When it comes to sharing quality time at the White House, Michelle admitted that it “definitely” brought them closer. She explained how their eight-year-old home positively affected their relationships; after all, her husband had previously been an Illinois state senator and went on to becoming U.S. senator, which required frequent travels away from their Chicago home.

“It wasn’t until the White House that we were together seven days a week, that we could have dinner together, he had time to coach the girls’ teams and go to all their events,” the First Lady added.